The delicate topic of toilets

The builder has insisted that this week, before the slab is laid for the extension I must go immediately to the plumbing merchant and select all sanitary ware and bathroom fittings.  Whooaa there, but I want to dither endlessly over such things, why so soon?   Apparently plumber needs to know such things yesterday, search me. 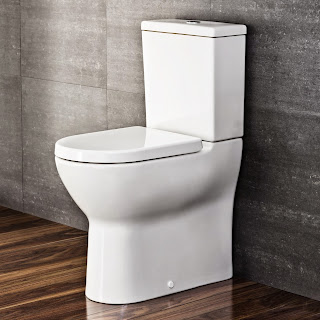 So we go for a romantic outing to the plumbing merchant in an outer suburban semi-industrial part of town (builder's guys, major discount, which we like) to choose taps, showers and .... lavatories.  When I suggested to the sales guy that we look at lavatories, he said 'you mean toilets?' which immediately got my English snob husband on edge.

Having a brief discussion before we leave home it is agreed that the loo we've put in the studio has a major design fault.  Whilst it may be groovy and sleek, the inside of it has a large flat area with the water sitting in a small recess at the back.  How to put this issue delicately?  Well, not how my husband explained it, that using it was like having a shit on a dinner plate that you had to scrape into the hole.  I don't know who was more embarrassed: me or the Ygen salesman, but he kind of got it right. 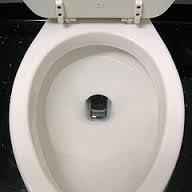 (The builder explained to us later that due to toilets now using less water, the design of them has had to change so that the water area must be smaller to allow for the reduced amount of water to have enough whoosh to adequately deal with the, ehem, contents.)

My bug bear with modern toilets is that they are not very comfortable to sit on.  True I have got a bony arse, but I find toilets today feel like they have no seat at all and you are actually sitting on the rim, as opposed to the nice old big flat bakerlite seats that you could settle down on for a nice long magazine article, or two.   When I explored this topic with the Ygen and suggested he might like to sit on the toilet and see what I mean, he got very embarrassed, but did it anyway.

Sorry, but if you are in the game of selling dunnies, you've surely got to be get over being embarrassed about what they are actually for, non?

Anyway, we finally found a lavvie that had a more central larger water hole, but I compromised on the uncomfortable seat.

Since when have I had time to read a magazine on the kazi in the last ten years anyway?

Love getting comments from blogland...

Some oldies, but goodies

Of interest (to me anyway)

Patsy
Writer/researcher Xgen with an overriding need to be critical of everything, but in a good way. Two kids, two dogs, two nationalities, two degrees.